The new trip: Now for something different, no, wait, it’s the same!

Last trip, I went to San Antonio.  This trip, I’m in New Orleans.  Obviously, I get to go to all the best places!

This trip was going to be completely different from the previous.  First off, a completely different state! Approaching the landing, it looked to me quite a lot like Texas did when I was landing there.  Big twisty river running through it, urban sprawl, was I in the right place?  Then the taxi ride to the hotel, it looked EXACTLY like Fort Lauderdale!  For a place I’ve never been to before, I wasn’t seeing a lot new and different.  Kinda odd.

I get to the hotel, and it’s not the same at least.  No balcony.  Not that I’d really want one with this totally unspectacular view:

Add a hat and a gun and it's Film Noir

Could the view be worse? Well, an industrial plant I guess.  Not that you could have one of those in a downtown core.  It continues to be worse though, the map isn’t as good: 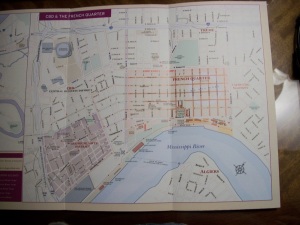 Notice the lack of a giant flower-whatsit building

I mean, it’s not a bad map or anything, but compared to what I’m used to…

Ah well, as a big change from last time, the first thing I have to do is Leave The Hotel!

That’s right, the first task is to go straight to the convention centre! Which isn’t just on the other side of the street this time.  That’s right: yet another way in which this trip really isn’t as good as the previous one.  Well, so far.  It has to get better!

Along the way to the convention centre, I see something that floors me:

Seriously, I had to read it 3 times.

What? Isn’t this NOT San Antonio? Apparently that “big winding river” is an important feature.  Again.  Hold on, I have to see something to remind me where I am.  What’s this hotel next to me? 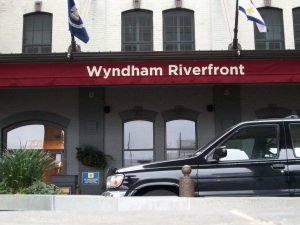 Augh! Another “river” place! This HAS to be San Antonio!

How do I know? Because if this was Texas there’s be a notice about carrying guns on that sign.

Well, I finally make it to the convention centre and pick up what I came for: 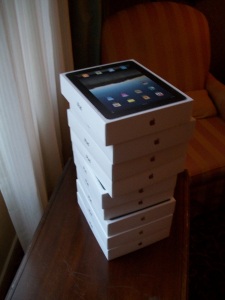 The Return Of The Apple Technology Stack

Yep, yet another batch of iPads.  More than last time even!

So I spend a while doing the software update.  Which goes a lot faster this time since I’m not installing onto brand-new hardware.  Okay, that bit is definitely better.

AKA "Task", a software developer. Hence, TaskWare.
View all posts by J West →
This entry was posted in Trip To New Orleans and tagged iPad, Louisiana, New Orleans. Bookmark the permalink.